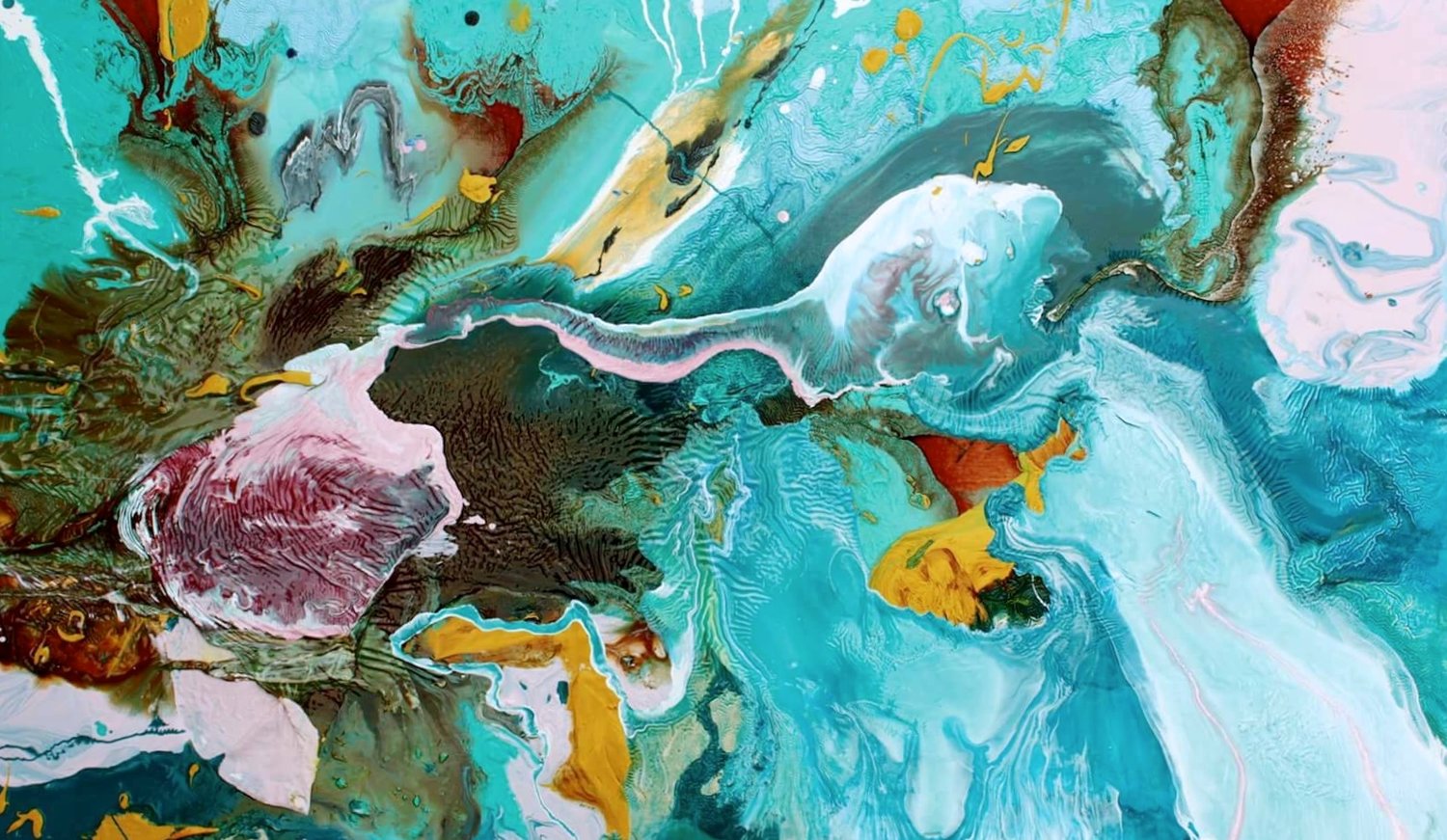 Ġulja Holland’s paintings in her latest show From a Distance give a glimpse of an abstract water world of rushing, gushing, spilling colour that is liquid and dynamic. The paintings seduce; their bright colours are appealing, the glistening paint playful and some emanate a sense chaotic but serene.

Holland cites her sources in the From a Distance manifesto: photographer Daniel Beltrá and artist Frank Dale. The former works in capturing the textures of the earth, while the latter is an abstract painter interested in the ‘entropic’—a lack of order or predictability, or a gradual decline into disorder.

Then it makes sense that the sense of chaos is secondary to the spiritual serenity that seems to dwell within the paintings. Holland’s reference to Beltrá aimed to draw attention to the looming threat of global warming and the physiognomical changes of the Earth in our Anthropocene Age, expressed and explored through the entropic nature of spilling paints. By nature, Chaos also comes secondary because it is uncanny, the dust under the carpet, and springs out when looked at from the corner of the eye. There is a certain contamination within the paintings, too—the colour blue pools and ripples, and is tinged by a lurking black or slashed by gashes of red, as disorder descends.

The conceptual moorings of the work feel second-hand, but as a starting point for abstraction it’s interesting. Boiling down the narrative or composition of the work, the gist is that of two-opposing forces: bad and good, contamination and pristine, man and nature. Opposing forces in visual language can be interpreted differently, and Holland utilises a wide variety of formal elements to bring out contrast. In fact, contrast is crucial: colour, line, shape, texture are all fighting each other. This is why the paintings can feel both serene and frenzied. However, there is a bone to pick with the work: they’re too close to the visual source of Beltrá for the entropic as an agent of disorder, composition and ultimately aesthetics to be taken seriously.

Either way, while these paintings are definitely attractive, there seems to be an issue of curation: there is too much variety of scale and composition within a small space.

Scale simply means the size of the paintings, while composition is how the formal elements in the painting are put together—colour, form, line, texture and their relationship to one another. Once doesn’t necessarily impact the other, but more likely than not, does.

While variety per se is good, too much of it weakens the cohesiveness and power of a body of work; whether through curation or artistic product, there is hardly a rhythm of scale or composition which makes for, frankly, bad presentation.

In spite of all this, Holland’s artistic output has always been well received and is gaining a good momentum and success, From a Distance being the second exhibition in two consecutive years. While there seems to be no connection with Holland’s previous work in her first exhibition Altered Egos, the experimentation is a healthy reminder that this young artist still has plenty of room to grow. Kudos.

As usual, we urge you to visit the exhibition and see the work for yourselves.